Motivation theory has emphasized the importance of self-efficacy in mediating students’ stress response during exams (e.g. Barrows, Dunn, & Lloyd, 2013). However, research into exam stress has primarily been conducted using self-reports of psychological stress. We examined the impact of a practice mid-term exam in a gateway engineering course on initial level and change in physiological arousal of the HPA axis using salivary cortisol. Additionally, we examined the relation between physiological arousal and students’ reported self-efficacy during the exam. We found that change in self-efficacy was inversely related to change in cortisol, suggesting students who experienced greater declination in self-efficacy did not experience as much recovery in HPA arousal over the course of the exam. 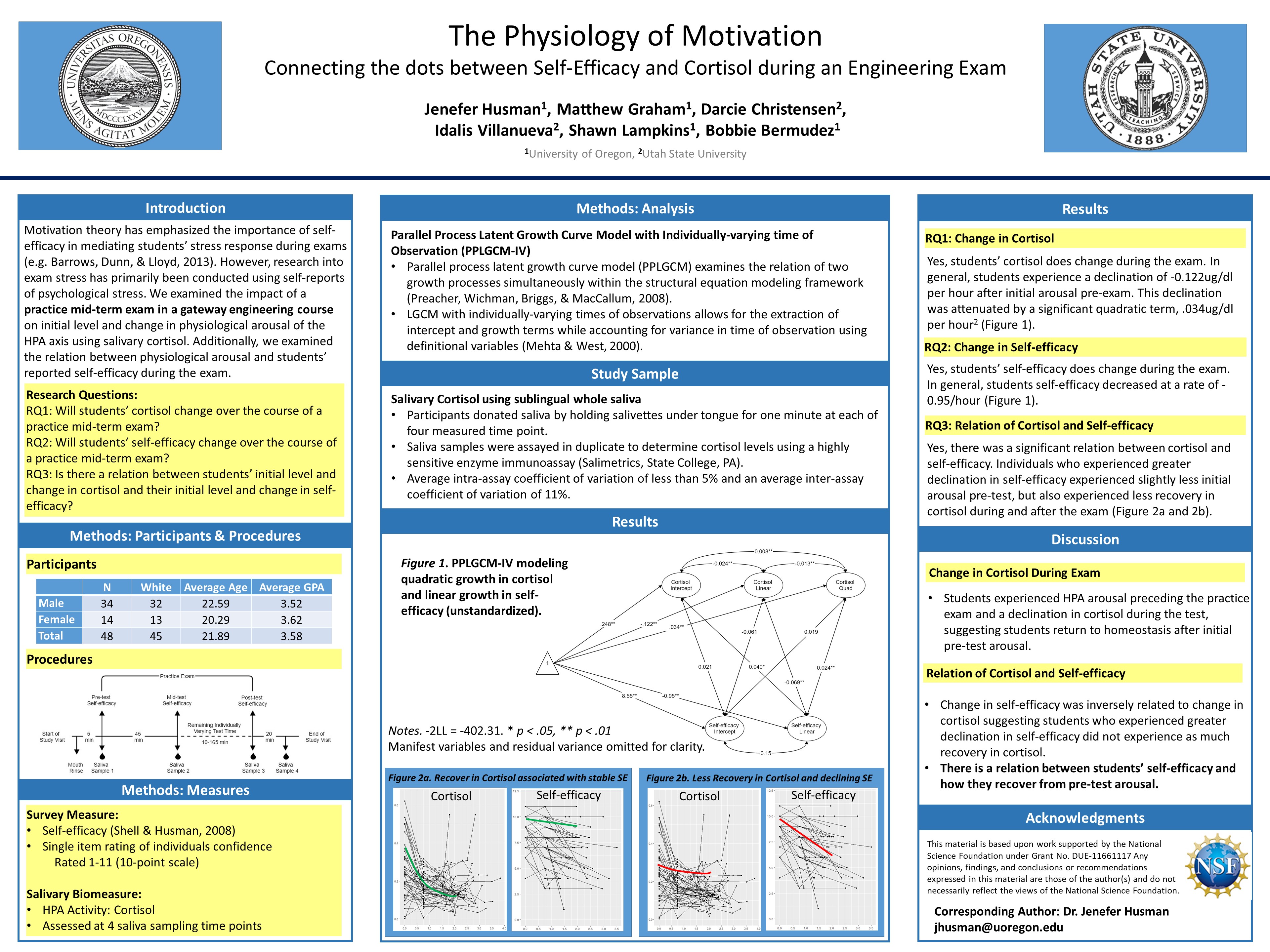 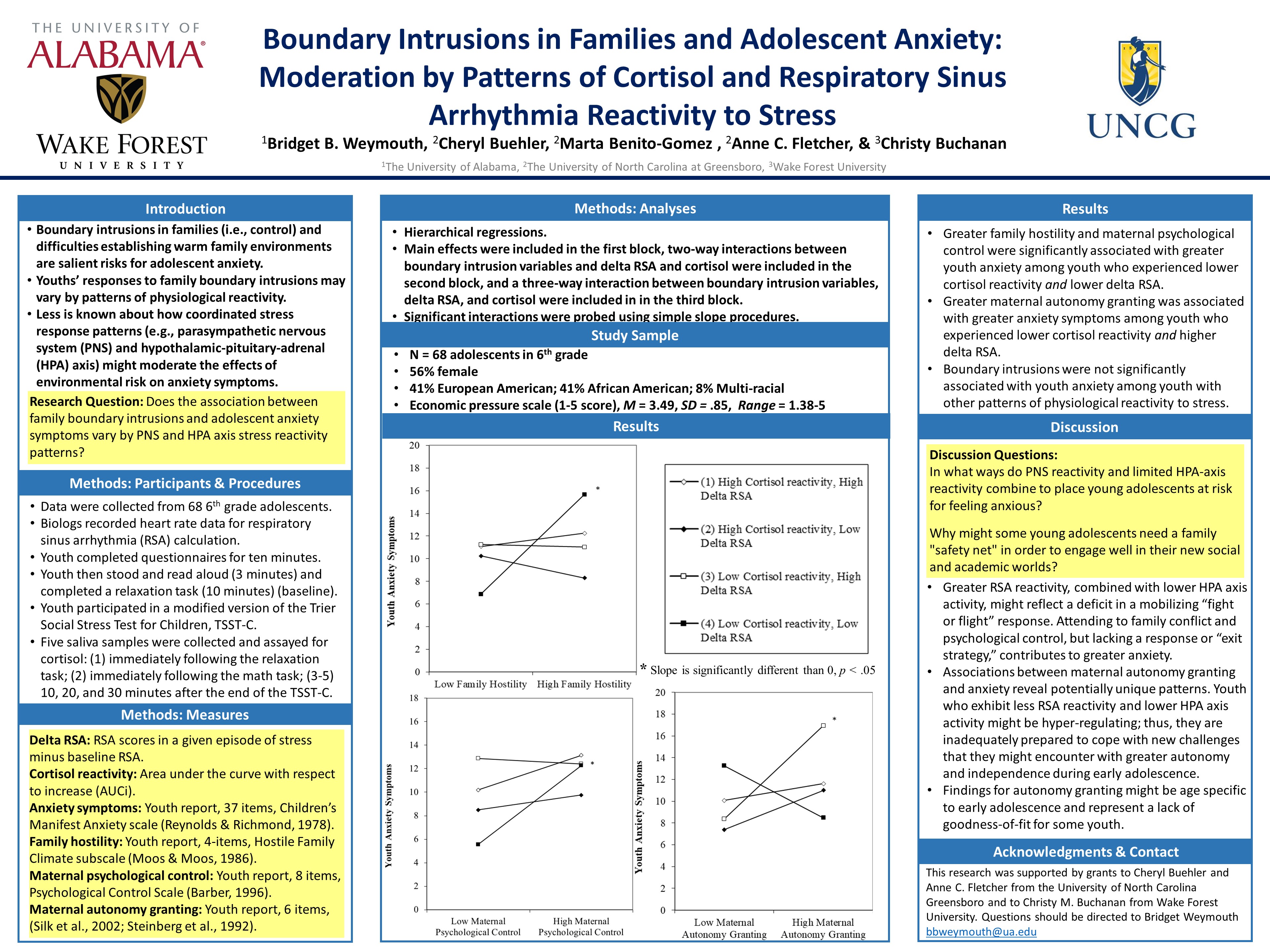 Bridget B. Weymouth
The University of Alabama 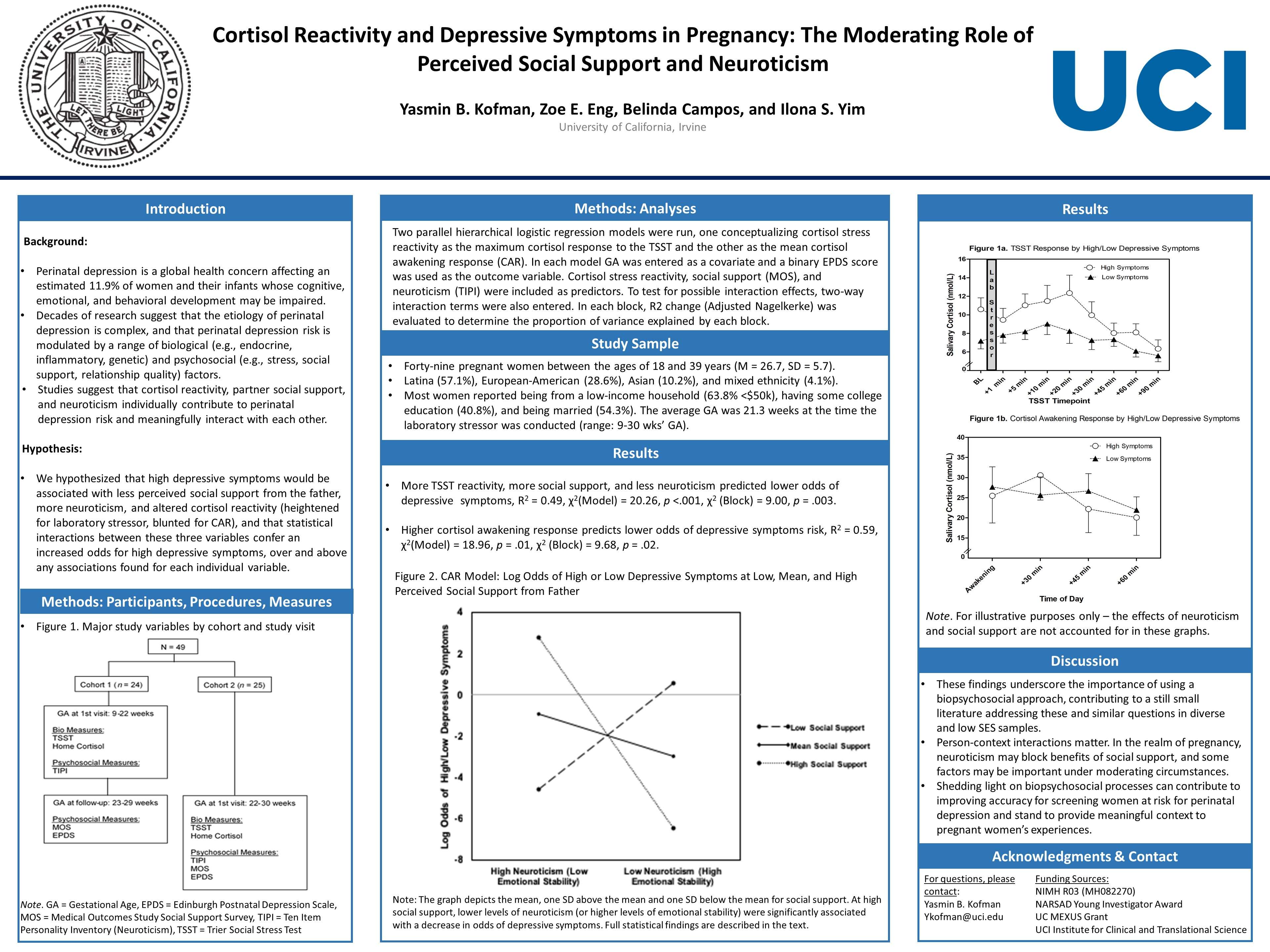 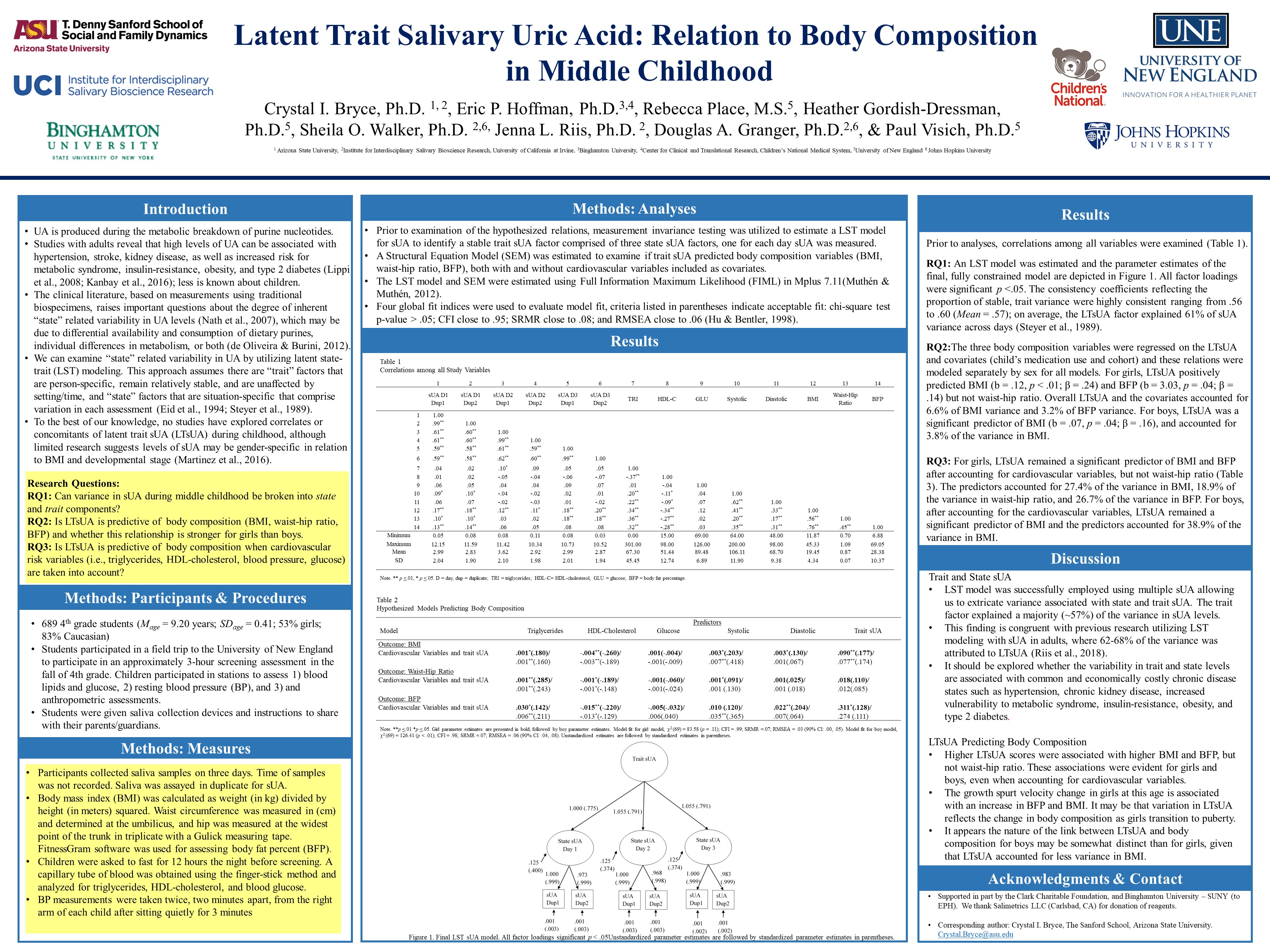 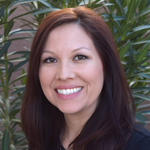 Cortisol secretion across the day is characterized by high morning and low evening levels. In young children, diurnal cortisol regulation is externally regulated through maternal scaffolding of child emotions. Specifically, positive maternal behavior is associated with steeper cortisol slopes throughout the day, while negative maternal behavior leads to dysregulated, flattened diurnal rhythms (Koss & Gunnar, 2018). When mothers dismiss or ignore children’s experiences of anger or sadness, they do not create opportunities for their children to learn how to regulate negative emotions (Lagacé‐Séguin & Coplan, 2005). How mothers respond to their children’s emotions depends on their capacity to reflect on and understand their children’s mental states, an ability known as reflective functioning (RF; Luyten, Mayes, Nijssens, & Fonagy, 2017). Mothers with effective RF see the child as a separate self and know their own limitations to fully understanding the child’s internal experience. We aim to investigate if mothers who are overly certain about the child’s mental states and have difficulty entering the child’s subjective internal world are more likely to dismiss the child’s emotions. We aim to examine if deficiencies in maternal emotion scaffolding are associated with dysregulated diurnal cortisol.

249 mother-child dyads with children between the ages of 2 and 7 years (Mage=4.38) and their biological mothers (Mage =29.29) participated in a longitudinal randomized controlled trial. This sample is composed of mothers with a history of maltreating their children (n=165) recruited through the Department of Child Services and nonmaltreating mothers (n=84) recruited from community centers. Maternal self-report measures on reflective functioning and emotional styles were collected at a baseline visit. Saliva was collected from children 3 times a day (wake, midday, evening) over 2 days. Samples were assayed for cortisol at Salimetrics. Cortisol levels were averaged over the 2 days. Area under the curve with respect to increase (AUCi) was calculated to determine diurnal cortisol change. Higher AUCi refers to flatter slopes throughout the day. 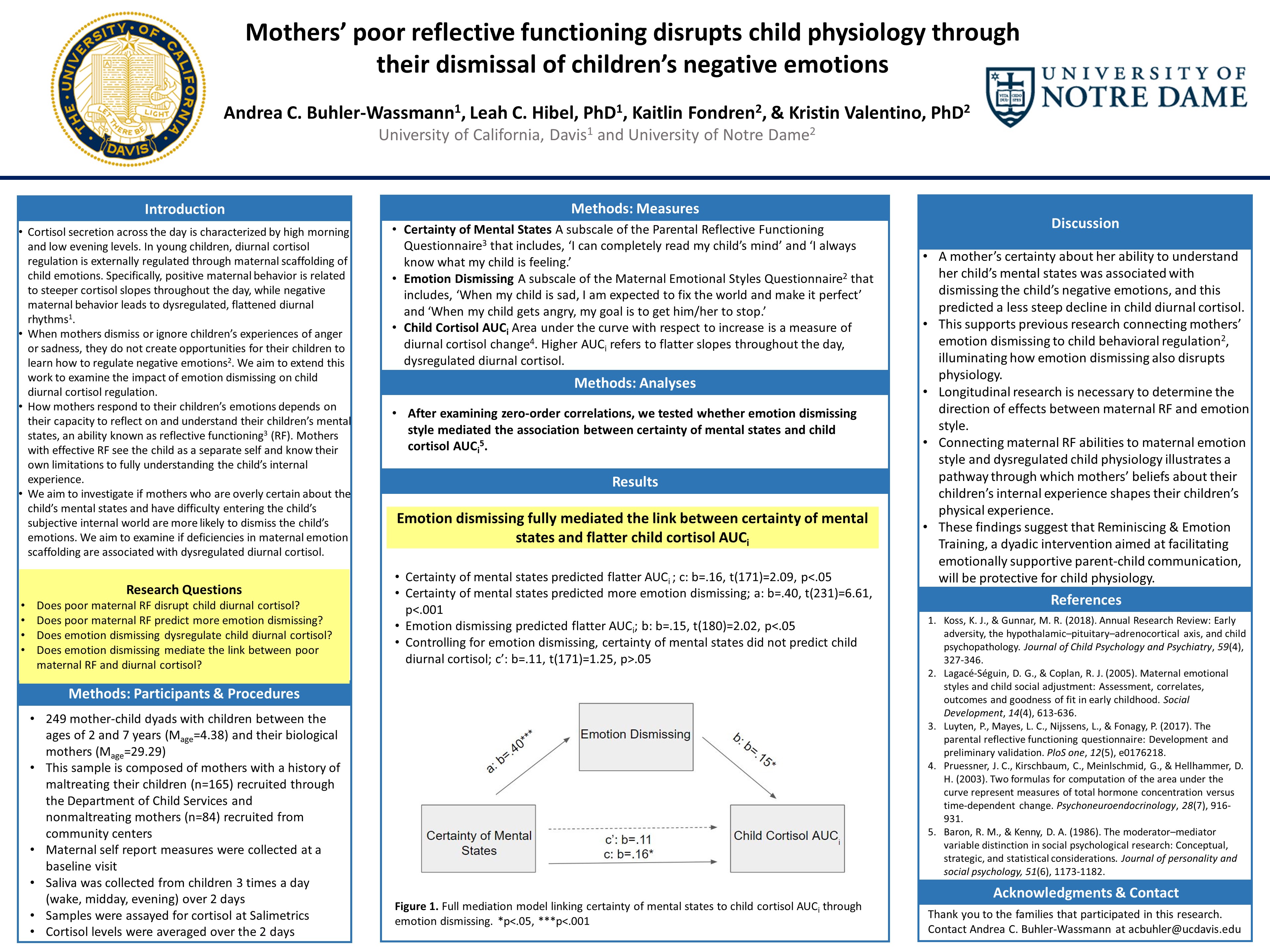 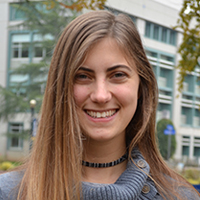 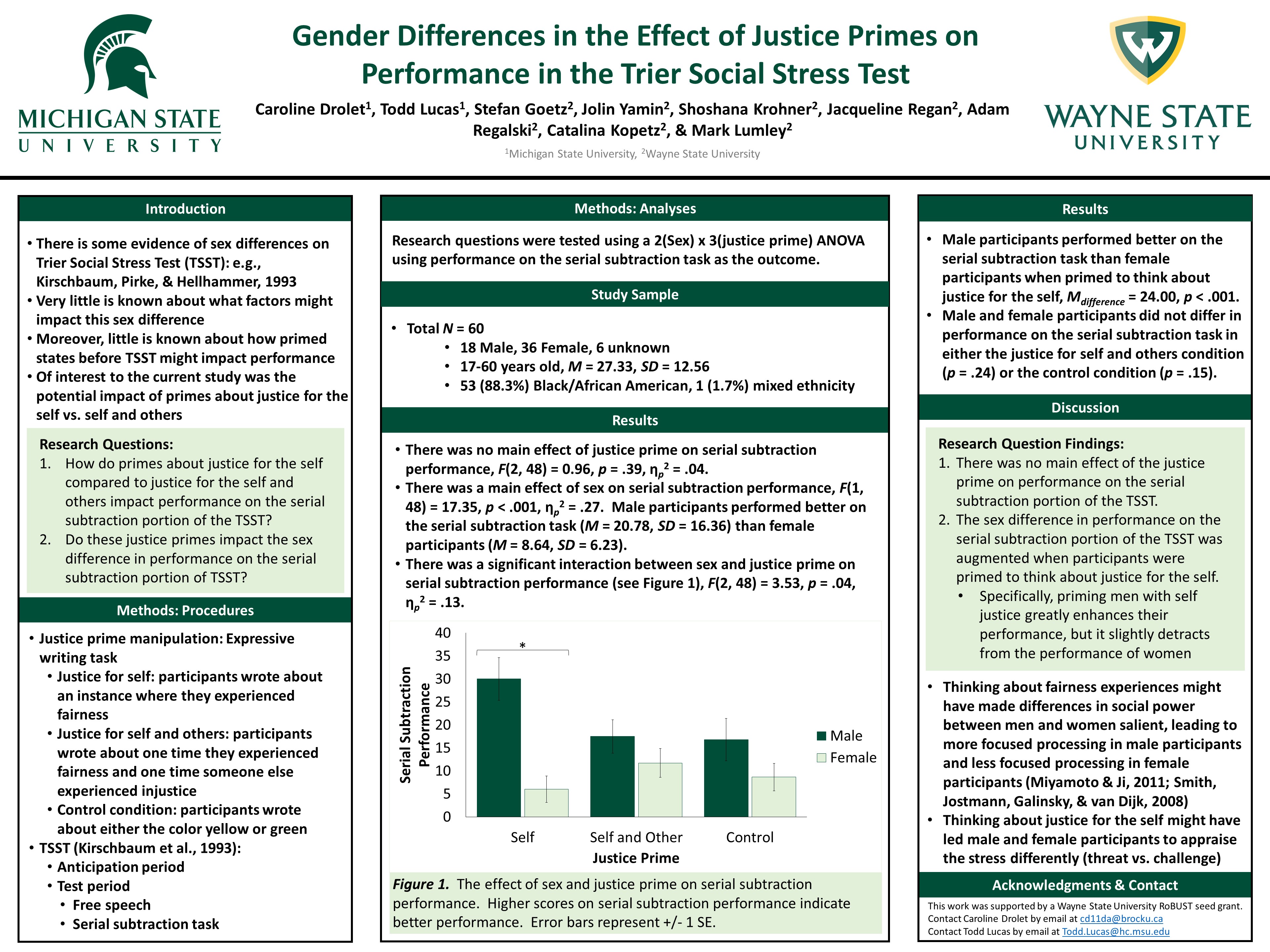 Stress biomarker research focuses on the activation of two main subsystems—the Hypothalamic-Pituitary-Adrenal system (HPA axis) and the Sympathetic Nervous System (SNS). Research on intimate partners indicates that physiological measures can become synchronized. Prior research on couples’ physiological synchronicity is based on either (a) lab studies or (b) used only one stress biomarker for studies using naturalistic setting designs. Limited attention have been paid to both salivary cortisol (HPA) and α-Amylase (SNS) in couples’ physiological synchronicity research in everyday life. We focus on these two systems because scholars have called for a “multiple systems approach” to capture the simultaneity of these stress response systems. We draw on data from a pilot study investigating the connections between stressors (e.g., discrimination, work, and family) among mostly African American couples (N = five couples) over two weeks. For the current study, we explore the stability in physiological synchronicity in cortisol (five samples a day over seven days for 35 within-couple days) and a-Amylase data (four samples a day across five days for 20 within-couple days). Results indicate that 68% of cortisol data points were correlated between husbands and wives; and 75% of the data were correlated for a-Amylase, which indicates stability in stress biomarkers for married couples. Correlations between wives’ and husbands’ cortisol at pre-sleep was more likely to be correlated the next morning but not for α-Amylase. The prevalence of correlated scores for both salivary biomarkers between wives and husbands indicate notable similarities; however, the timing of correlations seem to differ. These findings have important implications for biomarker research on couple dyads as the type of physiological measure and timing of collection may affect the extent to which couples are physiologically attuned. 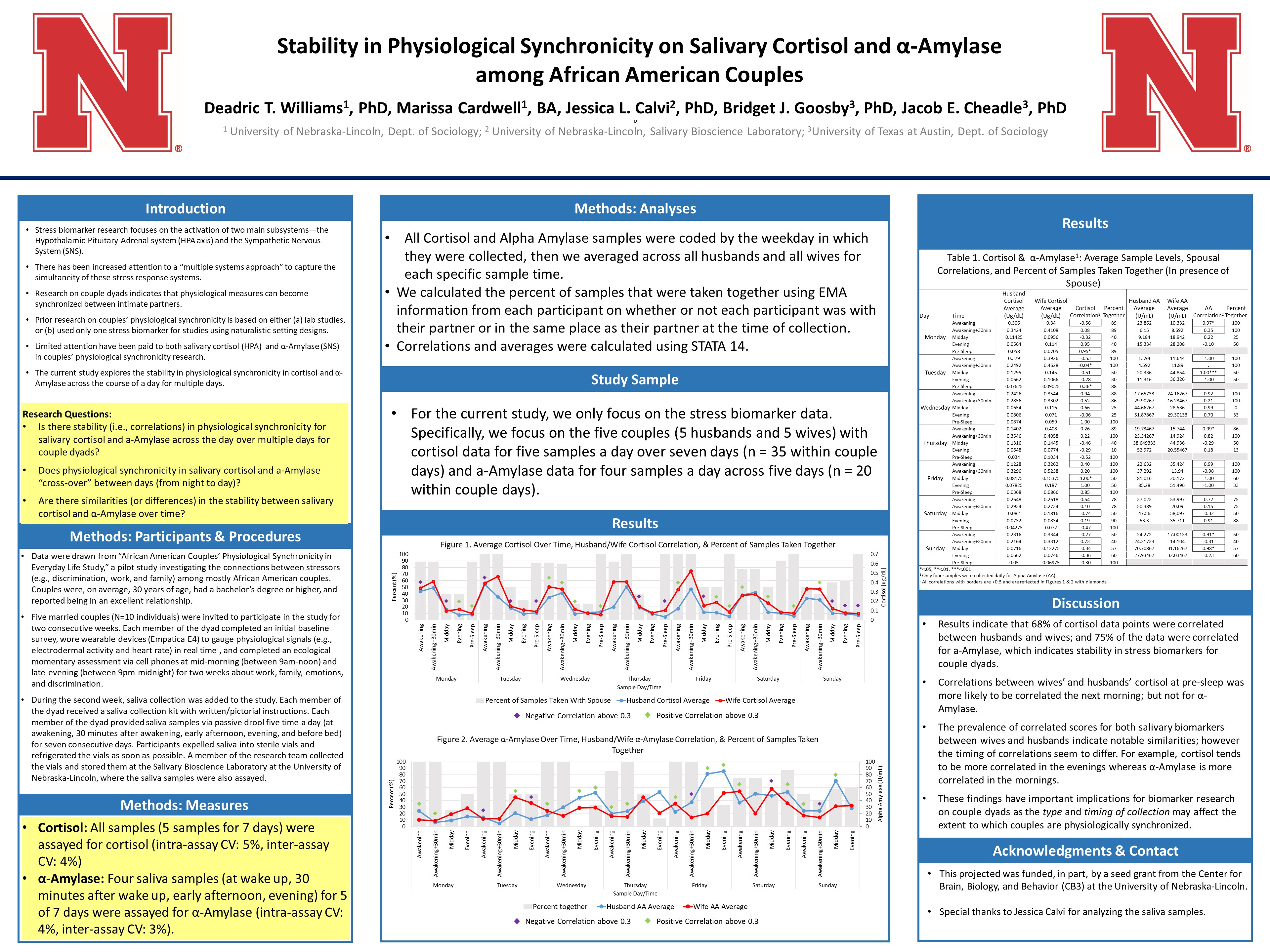 Inductively Coupled Plasma-Optical Emission Spectroscopy (ICP-OES), an analytical technique used for determining mineral and metal content in dissolved samples. This method was developed specifically for saliva and measures 10 analytes of interest [Li, Cr, Co, Mn, Hg, Pb, As, Cu, Ni, Zn] using a Perkin Elmer Avio 200. We are interested in how factors such as processing method or number of freeze thaws affect the 10 analytes and what the limits of detection and quantification are for this method. For most metals (exception Hg), concentrations were consistent with what was expected and differences in saliva sample collection, handling, and storage appear to be negligible. Detection limits were excellent and calculated to be sub 1 µg/L for most metals with heavy metals having the poorest detection limits of the panel. Limits of quantification for most analytes are 1µg/L and the heavier metals range 2.5-5µg/L. These data suggest the measurement of many elements in saliva is feasible and detectable at low concentrations. Integrating salivary measurements of elements into studies of human health and development has the potential to advance our understanding to new limits. 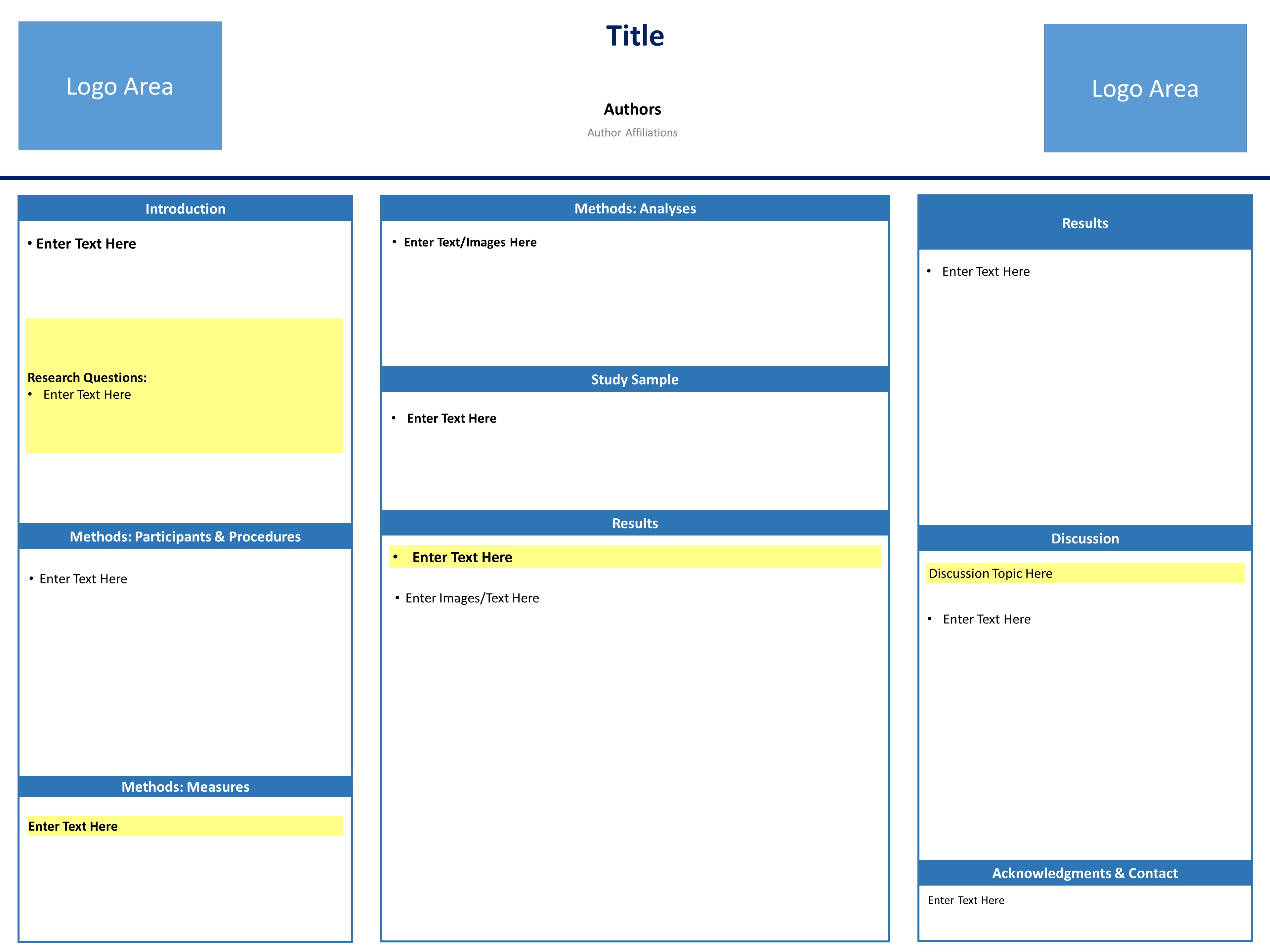 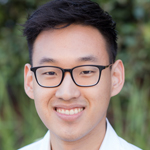